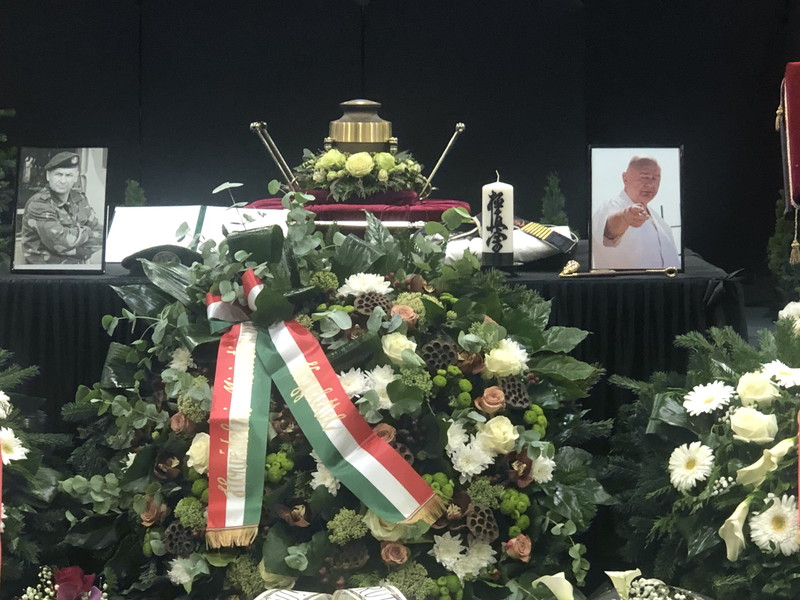 His loved ones, friends, comrades and admirers said goodbye to the “Hungarian samurai”.

Dr. János Mészáros said goodbye in a personal speech to the Hungarian Olympic Committee, the National Race sports Association, and on behalf of the Hungarian Karate Federation. In his speech, János Mészáros president emphasized that he was the number one grandmaster for karate, he was ” The shihan”, who was a legendary, iconic figure not only in karate, but also in Hungarian universal sports.

Lt. Gen. Romulusz Ruszin-Szendi, Commander of the Hungarian Armed Forces, praised Colonel Kálmán Furkó’s exceptional military career.
Ruszin-Szendi Romulusz also emphasized that Kálmán Furkó was always deeply respected.
His spirituality, his perception of leadership, is well exemplified by the fact that he was the leader who always said, “After me!” And not that “Forward!”.
He always showed the exercises, overcoming the obstacle, he was the first to leave the plane in the parachute jump, he explained.
Minister of Defense Tibor Benkő posthumously awarded Kálmán Furkó a degree with a laurel wreath in honor of his voluntary activity, outstanding professional achievements and exemplary life in the Hungarian Armed Forces.
The recognition was handed over to the widow of Kálmán Furkó by Romulusz Ruszin-Szendi and Tamás Sándor, a special operations observer of the Command of the Hungarian Armed Forces.

The mayor of Szolnok, Ferenc Szalai, focuses on his work for the city, the “connection to the city with a thousand threads”, instead of the traditional Szolnok Cup. As he put it, “It was our hero, many had a teacher and an example of an invincible soldier.

Representatives of the Hungarian shinkyokushin organization said goodbye to the legendary personality of karate in personal speeches – shihan József Kaloczy country representetive, shihan Tamas Szabo president of hungarian shinkyokushin organization, and lastly the representatives of Furko branch, while the president of the world organization Kenji Midori praised the merits of shihan Kalman Furko for kyokushin karate in a video message.

The Comemoration was attended by about a thousand people, and in the cemetery, according to a military ceremony, the master was laid to rest in perpetual peace.

WE PRESERVE THE VALUE, TEACHING AND SPIRITUALITY OF SHIHAN KALMAN FURKO.