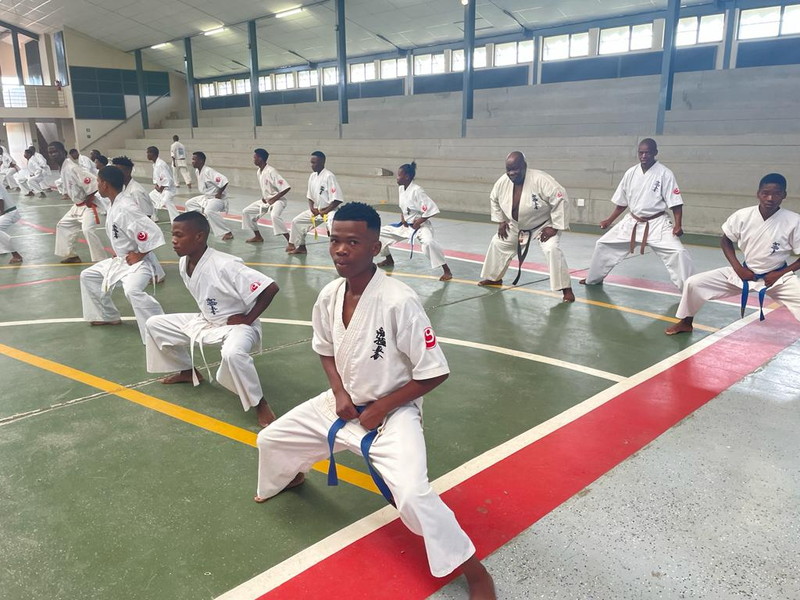 The WKO Matlosana and North West Province branch had a successful 2022 junior belts grading (kyu grading, white to brown belt) that was attended by 86 students, all taking the kyu grading examination. The grading was held at the newly opened Shweizer Reneke dojo under Sensei Kabelo Seetelo. The grading proceedings were conducted by Shihan Isaac Mashinini assisted by Sensei Thomas Sindephi Mayekani, Sempai Piet Merafe, Sempai Galeshewe Mohilisi, Sempai Riphus Mtshweni and the host Sensei Kabelo Seetelo. The grading performance of the students was very impressive as they showed the determination and hard work, they have put in to prepare for this examination day. The grading syllabus focused on physical training (strength and endurance), flexibility, Kihon, Ido-Geiko, Kata and Kumite sessions specific for each kyu level.

The extension of WKO North West to Shweizer Reneke is good demonstration that WKO Shinkyokushinkai karate in North West Province has grown and continues to grow alarmingly and that karate development thereof is succeeding. Students were encouraged to continue learning and practicing karate every day in their respective dojos in order to acquire more knowledge and skills and to become better karate-kas and future instructors. The host Sensei Kabelo Seetelo and WKO Branch Chief Sensei Mayekani, congratulated the students for their hard work and commitment. They have also extended their gratitude to all the parents who supported the event and to Shihan Mashinini for attending and overseeing the grading. The event was possible and successful through the efforts and support of parents and instructors from various dojos in Matlosana and North West Province.