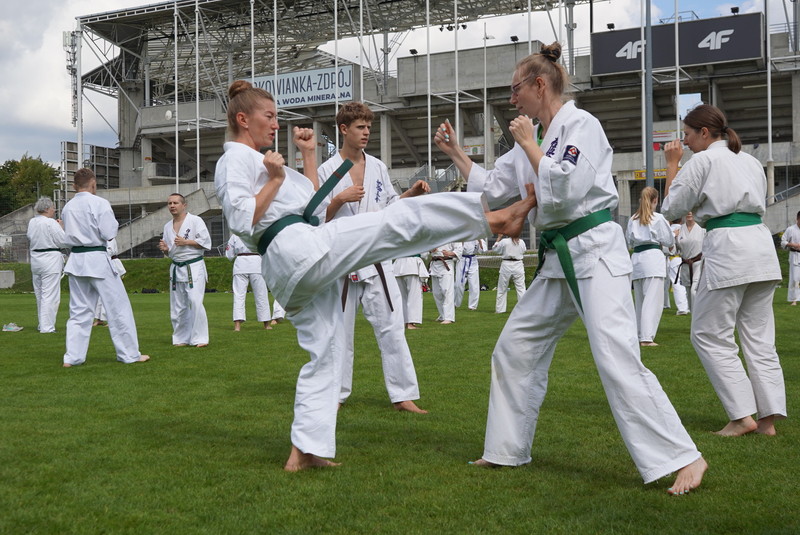 On August 26-29, in the city of Kielce, in which in 1 year the 7th Shinkyokushinkai Karate World Championship will take place, the international summer camp of the Polish Karate Shinkyokushinkai Federation was held.

In the presence of the nationwide TV station TVP 3 and the regional radio and press, the camp participants were welcomed by the authorities of the region and the city who attended the opening. The speeches were delivered by the Voivode of Świętokrzyskie, Mr. Zbigniew Koniusz, the Deputy Mayor of Kielce, Mr. Marcin Chłodnicki, the Minister of Sport, Anna Krupka, and the Marshal of the Voivodship, Mr. Andrzej Będkowski, represented by Mr. Łukasz Korus.

Sensei Agata Winiarska (Poland) and Sensei Lukas Kubilius (Lithuania) were the main instructors, and the 182 people participated in the camp, including eight Polish Branch Chiefs. There were 13 training sessions, there were also exams for kyu and dan grades, in which 42 people participated.

The Kielce Karate Club prepared the camp, and the whole event was supervised by Mr. Tomasz Kecko, the Chairman of the Organizing Committee of the 7th World Championships.

During the camp, there was a karate show in the old town square and finally sayonara in the beautiful interiors of the Cultural Center. Special guests, Mr. Sławomir Stachura, director of the secretariat of the President of the City of Kielce, and Maciej Sokolowski, President of the Polish Karate Association, were present in the last training session.

The accent of the last training was honoring the memory of the European Shihans who have passed away: Shihan Furko Kalman, Shihan Steve Arneil, Shihan Loek Hollander.