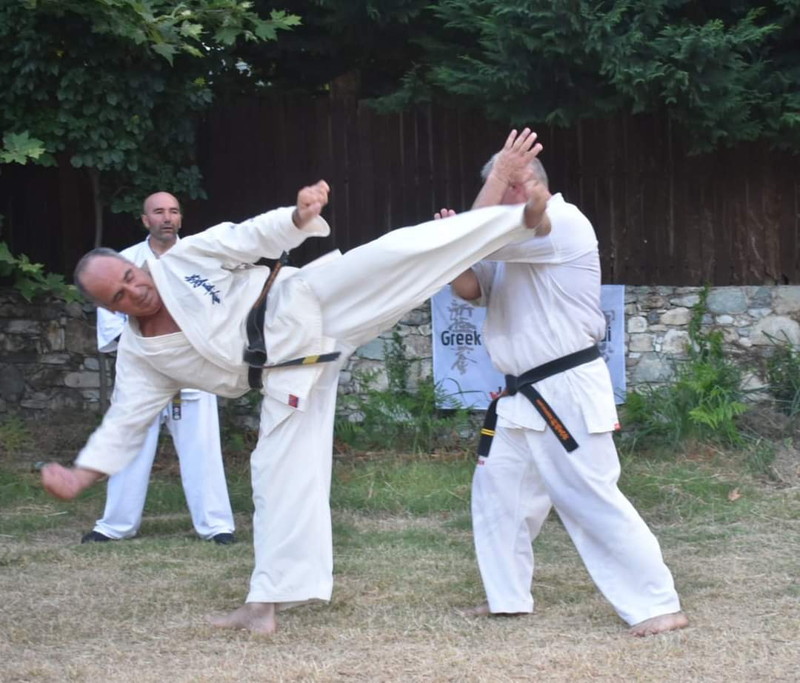 Faithful to tradition and its summer institution, the Greek Shinkyokushinkai Association successfully organized the 24th Greek Summer Camp Shinkyokushinkai 2022.
Co-organized by the Region of Thessaly, Regional Unit of Magnesia and Northern Sporades, the camp took place from July 30th to August 4th in Agios Ioannis Village in Pelion, at the beautiful Papa Nero Beach.

Sixty-five (65) participants, together with their instructors, gave their best in all training sessions: every day from Thursday to Sunday with a program in the morning 07:00-08:30 am at Papa Nero beach and in the afternoon at a specially designed area in Agios Ioannis Pelion.

During the summer camp, the two Shihans taught IDO GEIKO-KIΗON IDO-KATA techniques, KUMITE competition techniques, while the preparation of the athletes who participated in the 1st and 3rd Dan exams was completed, where special emphasis and attention was given to KATA. The two Shihans taught tirelessly while both participating in setting an example to the younger ones by trying to pass on their valuable knowledge and vast experience to everyone.

There were also the participants from other countries at the Summer Camp; the presence of the Shinkyokushinkai representative of Bosnia Senpai Igor Rankovic, who participated with a group of 12 people from his Dojo, was special. French Branch Chief Sebastien Vanroyen participated with two athletes, while from England Sensei John Heath also traveled to participate for the 4th time, supporting the event. The discipline, respect, great attention, interest, and concentration in the training of the foreign athletes was impressive, showing their strong will to get as much as possible in the technical and teaching and training method.

In addition to the foreign teams, the instructors from the Matsushima World Organization, Shihan Antoniou Panagiotis, Sensei Pavlou Christos and Senpai Bekiras Apostolos, who cultivate Kyokushinkai through full contact matches, participated and we thank them warmly for responding.

It is worth mentioning that Shihan Antoniou Panagiotis was a fellow athlete with Shihan George Kosmidis. The Summer Camp was also attended by Sensei Barboutis Anestis, with whom the topic of the world cup in Poland was discussed as well as the preparation of Rafaela Tsakiris, who will participate in the said championship.

At the end of the trainings, the Dan grading exam was held, according to Japanese and European standards, by the two Shihan, as examiners awarding degrees up to the 3rd Dan.
The exams which took place in the morning 11:00 – 13:00, lasted 2 hours at KIHON and KATA and those who passed successfully, continued in the afternoon 19:00-20:30 pm at KUMITE (full contact matches).

In the exams, the following were promoted to 1st dan -Shodan: Koupanis Aristotelis, Kalioglou Theodoros, Andreas Damakoudis, Tsakri Eleonora, Tsianos Georgios, Polychronidou Vaia, Lambrianidis Georgios, Mantoudis Ioannis, Kamenopoulos Konstantinos, Bakyrtsis Georgios, Sokratis Taher, Oltian Taka and the 3rd Dan Grigoris Papadopoulos.
Sensei Viki Kosmidou took charge of the organization, with the guidance of Shihan George Kosmidis, with his tireless wife Katerina Kosmidis, who in all Summer Camps, helps in the preparation as well as in their organization. The help of Senpai Karolina Kakaziani is important.