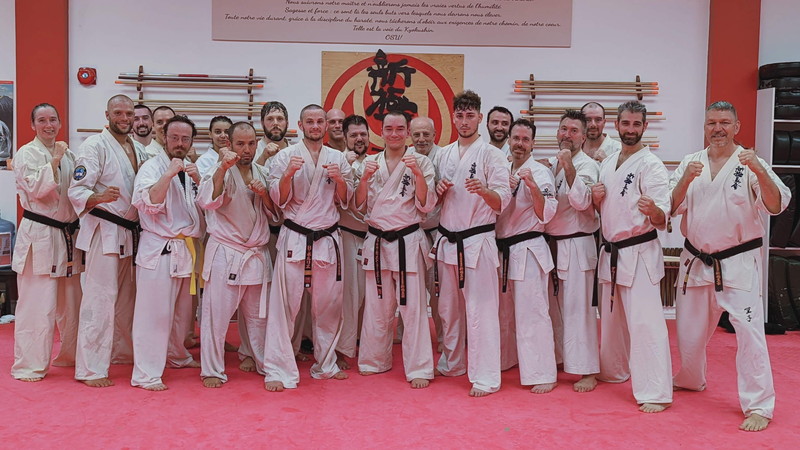 As many of you know, the 7th World Karaté Championships in Weight Categories will take place on September 24th and 25th in Kielce, Poland. On Friday, August 6th we had the pleasure of welcoming to our dojo all the Canadian male athletes who will be participating in this event.

Several Senseis, Senpais, and students who had trained in our school’s full contact team during the year were present. Notably, Senpai Charles Goelen who representing our dojo in the -75 kg weight category. In addition, we had the pleasure of welcoming Sensei Benoit Porlier (SpiritGym514) the most experienced fighter of the Canadian men’s team, Sensei David Ricci (Karate SD / Sutogure Dojo), and his protege Massimiliano Tilli having already participated in the Dream Cup in Japan. We would like to thank Sensei François Pressault (Karate Mascouche) and his student Maël, who came to lend a hand to the fighters present. Senpai Kim Carriere (West Island Karate) proudly representing the Canadian women’s team could not be present during this training.
It is important to note that this event was possible thanks to our branch chief Shihan Normand Bordeleau and Sensei Marie-Josee Tremblay, both directors at the Longueuil dojo.

The training began by presenting the three fighters and continued with a vigorous warm-up. We started with upper body conditioning followed by counter-attack techniques such as chudan mae geri from the front leg while stepping back. The movement was then repeated with jodan mae geri, In this exercise, control and balance were important points to consider. We ended the warm-up with a counter-attack technique which consisted of positioning our opponent using an oi tsuki followed by a gyaku tsuki while stepping back, finishing with an ushiro kakato geri. The objective was to make a direct and rectilinear attack rather than a circular attack.
Once the participants had warmed up, it was time for kumite. Following some instructions from Shihan Normand Bordeleau, we began an intense hour of combat. There were good exchanges between the different karatekas, I would like to point out the positive energy and the respect of the participants. We had the pleasure of fighting alongside and with our three competitors during this sparring session.

At the end of the training, the three Canadian male representatives were spaced equally on the tatami and then faced without respite all the fighters present at this training. The energy was at its peak and we could feel the teamwork and the well-meaning participants wanting to help the fighters prepare for this important international competition.
Following the training, we took the traditional group photo and had the opportunity to chat with the different participants. Getting to know each other while creating new friendships.
Shihan Normand Bordeleau and the Senseis of the participating schools have already decided to renew this experience, before and after the upcoming World Championship.