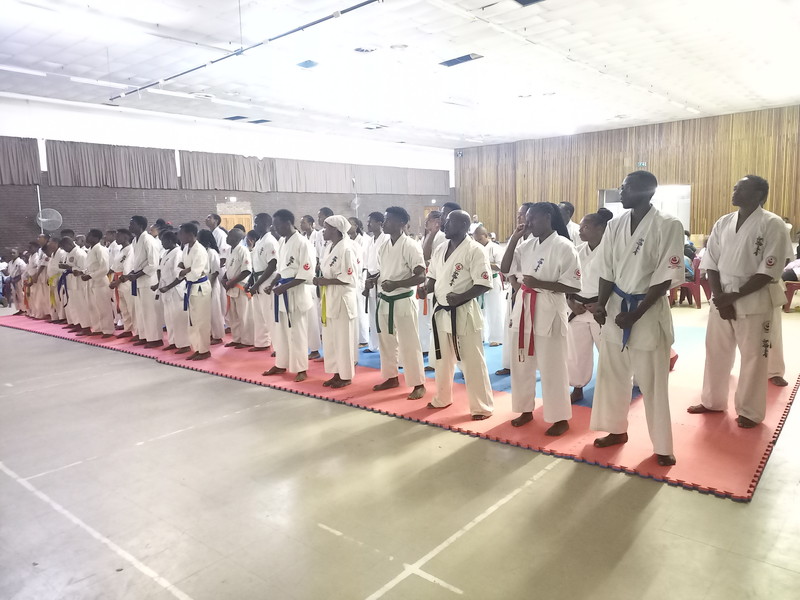 The Limpopo WKO Shinkyokushinkai karate has yet again hosted another successful tournament, The 5th Limpopo Province Karate Championship on September 3, 2022 at Namakgale, Foskor Community Centre. The tournament was hosted by Phalaborwa branch under the leadership of WKO Branch Chief, Sensei Sydeck Monyela.

The tournament had registered 208 competitors, participating in both junior (under 18 years) and senior (18 years and above) weight categories and the spectators packing the hall to capacity to witness this historic event in the town of Phalaborwa. The annual Limpopo Province tournament is growing and was well attended. It has attracted fighters from different organizations across the country. It was attended by WKO Shinkyokushinkai South Africa teams from 5 provinces: Gauteng, Limpopo, North West, Eastern Cape and KwaZulu-Natal province; and teams from IKKF, Limpopo karate Academy, Kyokushinkan, Nakamura and IKO Matsushima.

Limpopo Province branch chiefs and the host, extend their gratitude to the sponsors, PGN (PTY) LTD for trophies, without which there can be no tournament. The host also acknowledged Shihan Isaac Mashinini for honoring the invitation and blessing the tournament as a main referee for the senior division’s finals. They congratulated the fighters and the instructors for their commitment to the development and growth of the organization and the sport and expressed satisfaction with the performance of all fighters, for the great skills and determination they have showed on the tatami. The host would also like to thank all those who came to support the event from different organizations, provinces and countries, including parents. Shihan Isaac Mashinini, the president of WKO Shinkyokushinkai South Africa and Africa Region, shared his massage of gratitude and encouraged all parents for allowing their kids to participate in the event and acknowledged everyone who managed to avail themselves and emphasized to karatekas that respect, discipline and loyalty is key.